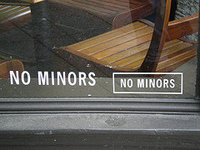 Just over 200 years ago, sociology was born. As a science, it hadn’t existed before that in any substantive way. Within 50 years, sociologists had imposed their scientific conceptualization onto education, which emerged as a field in the late 19th century. Pedagogy, which is the science of education, didn’t exist until then.
Both sociology and pedagogy are the driving forces of how our society “sees” children and youth today. Both were developed by adults for the purpose of perpetuating society. They inherently believe that in order for society to continue, young people had to be controlled. That means that society is based on adultism.
Adultism, which is bias towards adults, discriminates against children and youth. It insists that the ways adults “see” the world, including their ideas, experiences, actions, interactions, and judgments, are the only or most valid and valuable perspectives. In other words, only adults matter.
Adultism has structured families, communities, cultures, and societies for time immemorial. It isn’t a recent phenomenon. The usage of social institutions to perpetuate adultism isn’t new, either: Churches were long used to control the behavior of young people; which in turn allowed Church fathers to control the behavior of adults through patriarchy and paternalism. Adultism made their jobs easier.
Adultism makes the jobs of adults today easier, too.
Without having to think about it, teachers, youth workers, and even parents can control young people. They dispose of wisdom, extol the virtues of manners, and enforce their conceptions of the world onto young people through education and punishment, legislation and rules.
The question becomes whether, in a technologically and evolutionary progressive world, adultism is still an effective mechanism for perpetuating society. Particularly in these times when society itself is in flux, proving to be a malleable and subjective tool for social organization, we must question whether it’s wise to continue to rely on adultism as a tool for social organizing, if only because young people have proved to be:
These realities provide an opportunity for adults to reconsider the ways we see and interact with young people. More importantly though, they challenge us to reconceptualize society’s conceptions. Are we going to continue being driven by outdated modalities, or rise to the occasion we are faced with? Another way to say that is, Are we going to let old rich white guys who’ve been dead for a century or more control us today?
We need new realities starting today, and adultism must stop now.